A  The Spanish-American War of 1898 ended Spain’s colonial empire in the Western Hemisphere and secured the position of the United States as a Pacific power. U.S. victory in the war led to a peace treaty that forced the Spanish to relinquish (give up) claims on Cuba, and to give up sovereignty (control) over Guam, Puerto Rico, and the Philippines to the United States. The United States also annexed the independent state of Hawaii during the conflict. The war enabled (allowed) the United States to establish its predominance (power) in the Caribbean region and to follow its strategic and economic interests in Asia.

B  The war that erupted in 1898 between the United States and Spain was preceded by three years of fighting by Cuban revolutionaries to gain independence from Spanish colonial rule. From 1895–1898, the violent conflict in Cuba captured the attention of Americans because of the economic and political instability that it produced in a region within such close geographical proximity to the United States. The long-held U.S. interest in ridding the Western Hemisphere of European colonial powers and American public outrage over brutal Spanish tactics created much sympathy for the Cuban revolutionaries. In 1896 Spain responded to the Cuban revolt by sending General Valeriano Weyler to Cuba to restore order. Weyler tried to crush the rebellion by herding the entire rural population of central and western Cuba into barbed-wire concentration camps.  By early 1898, tensions between the United States and Spain had been mounting for months. After the U.S. battleship Maine exploded and sank in Havana harbor under mysterious circumstances on February 15, 1898, U.S. military intervention in Cuba became likely.

C  The future Secretary of State John Hay described the ensuing conflict as a “splendid little war.” The first battle was fought on May 1, in Manila Bay, where Commodore George Dewey’s Asiatic Squadron defeated the Spanish naval force defending the Philippines. On June 10, U.S. troops landed at Guantanamo Bay in Cuba and additional forces landed near the harbor city of Santiago on June 22 and 24. After isolating and defeating the Spanish army garrisons in Cuba, the U.S. Navy destroyed the Spanish Caribbean squadron on July 3 as it attempted to escape the U.S. naval blockade of Santiago 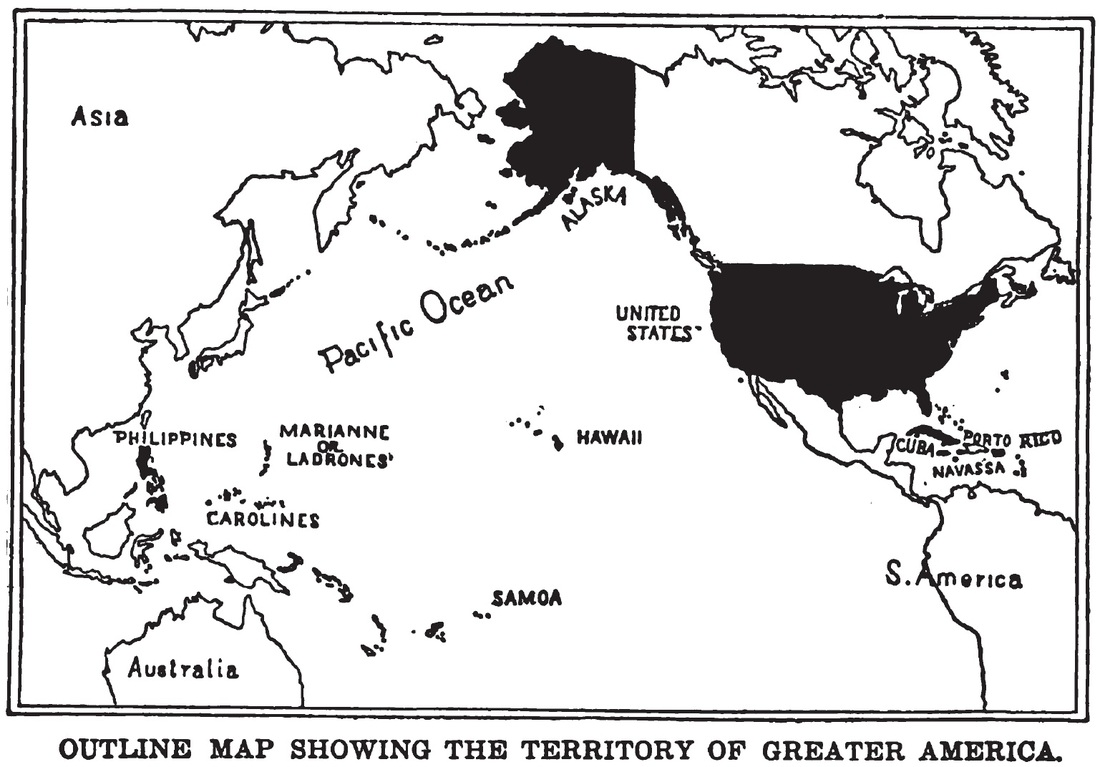 D  American sympathy for “Cuba Libre!” (free Cuba) grew with each day’s headlines. When President William McKinley took office in 1897, demands for American intervention in Cuba were on the rise. McKinley preferred to avoid war with Spain, so tried diplomatic means (negotiating, holding meetings, talking) to resolve the problem. At first, his efforts appeared to succeed. Spain recalled General Weyler, modified (changed) the policy regarding concentration  camps, and offered Cuba limited self-government. In February 1898, however, the New York Journal published a private letter written by Enrique Dupuy de Lôme, the Spanish minister to the United States. A Cuban rebel had stolen the letter from a Havana post office and leaked it to the newspaper, which was thirsty for scandal. The de Lôme letter criticized President McKinley, calling him “weak” and “a bidder for the admiration of the crowd.” The embarrassed Spanish government apologized, and the minister resigned. Still, Americans were angry over the insult to their president.

E  On February 17, 1898, the American battleship Maine was blown up in the harbor of Havana, Cuba. For several years, Cuba had been fighting for its independence from Spain. President McKinley had tried to keep the United States out of this war. He had sent the Maine to Havana only to protect American citizens there. Shortly after the Maine exploded and sunk, several American newspapers reported the event and placed all the blame on Spain. These newspapers, including the New York Journal, stirred up bitter feelings among Americans. As a result, members of Congress who favored Cuba were able to force President McKinley to declare war on Spain.  At the time, no one really knew why the ship exploded; however, American  newspapers claimed that the Spanish had blown up the ship. The Journal’s headline read “The warship Maine was split in two by an enemy’s secret infernal machine.” Hearst’s paper offered a reward of $50,000 for the capture of the Spaniards who supposedly had committed the outrage.

Study the headline below to answer the next questions. 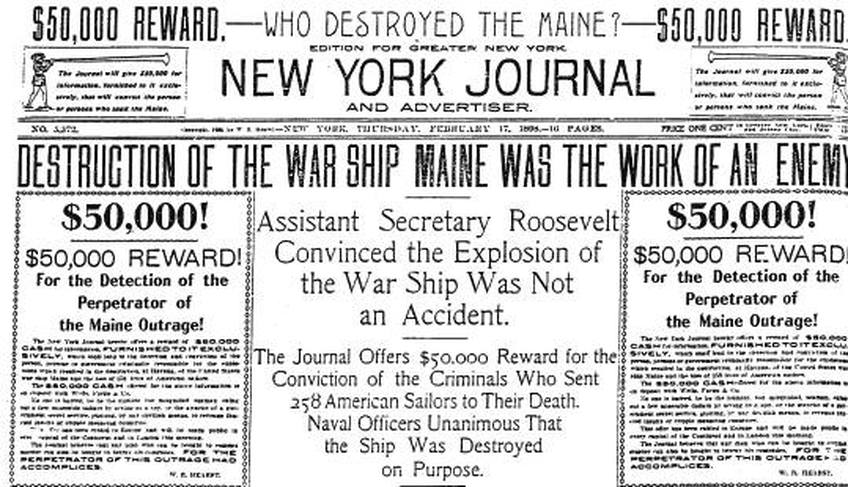 G  The explosion of the Maine and the headlines that followed by journalists such as William Randolph Hearst and Joseph Pulitzer drew the United States into the Spanish American War.  This type of reporting, which used sensational headlines and wild accusations (with usually very little to back them up as fact), was called "Yellow Journalism".  Its main goal was to sell newspapers and create drama, not to report the truth.
​
H  On March 28, 1898, a naval court of inquiry concluded that a mine had destroyed the Maine. Throughout America, people
began using the slogan “Remember the Maine!” as a rallying cry for war. By early April, President McKinley was under tremendous pressure to go to war. American mobs were demonstrating in the streets against Spain—and against McKinley for refusing to go to war.

I  Within the Republican Party, jingoism, or an attitude of aggressive nationalism, was very strong, especially among younger members of the party. These members were furious at McKinley for not declaring war. Assistant Secretary of the Navy Theodore Roosevelt, for one, raged that McKinley had “no more backbone than a chocolate éclair.” Many Democrats were also demanding war, and
Republicans feared that if McKinley did not go to war, the Democrats would win the presidency in 1900. Finally, on April 11, 1898, McKinley asked Congress to authorize the use of force to end the conflict in Cuba.

J  On April 19, Congress declared Cuba independent, demanded that Spain withdraw from the island, and authorized the president to use armed force if necessary. In response, on April 24, Spain declared war on the United States. For the first time in 50 years, the United States was at war with another nation.

What to do with the newly freed territories

U  As American and Spanish leaders met to discuss the terms for a peace treaty, Americans debated what to do about their newly acquired lands. Cuba would be given its freedom as promised, and Spain had agreed that the United States would annex Guam
and Puerto Rico. The big question was what to do with the Philippines. The United States faced a difficult choice—remain true to its republican ideals or become an imperial power.

Philippines
V  Many supporters of annexing the Philippines emphasized the economic and military benefits of taking the islands. They would provide the United States with a naval base in Asia, a stopover on the way to China, and a large market for American goods.

W  Other supporters believed America had a duty to teach “less civilized” peoples how to live properly.  “Surely this Spanish war has not been a grab for empire,” commented a New England minister, “but a heroic effort [to] free the oppressed, and to teach the millions of ignorant, debased human beings thus freed how to live.”  This attitude reflects the social Darwinism of European imperialism - the belief that some cultures were better and stronger and should dominate others to make them more like they were.

Y  On December 10, 1898, the United States and Spain signed the Treaty of Paris. Under the treaty, Cuba became an independent country, and the United States acquired Puerto Rico and Guam and agreed to pay Spain $20 million for the Philippines. After an intense debate, the Senate ratified the treaty in February 1899. The United States had become an imperial power

Z  The United States quickly learned that controlling its new empire would not be easy. Emilio Aguinaldo called the
American decision to annex his homeland (the Philippines) a “violent and aggressive seizure.” He then ordered his troops to attack the American soldiers in the Philippines.  Filipino guerrilla soldiers attacked US troops who retaliated by forcing hostile Filipinos into reconcentration camps.  Many died of starvation or disease.

Cuba
BB  After the war, the United States established a military government in Cuba. Although the United States had promised to grant Cuba its independence, President McKinley took steps to ensure that Cuba would remain tied to the United States. He allowed the Cubans to prepare a new constitution for their country, but he attached conditions. A special amendment that Senator Orville Platt attached to the 1901 army appropriations bill described those conditions. The Platt Amendment specified the following:
(1) Cuba could not make any treaty with another nation that would weaken its independence or allow another foreign power to gain territory in Cuba;
(2) Cuba had to allow the United States to buy or lease naval stations in Cuba;
(3) Cuba’s debts had to be kept low to prevent foreign countries from landing troops to enforce payment; and
(4) the United States would have the right to intervene to protect Cuban independence and keep order.

CC  Although the Cubans rejected the Platt Amendment at first, they quickly realized that unless they accepted it, the United States
would maintain its military government of the island. Reluctantly, they added the amendment to their constitution. The Platt Amendment
governed relations between the United States and Cuba until its repeal in 1934. It effectively made Cuba an American protectorate.